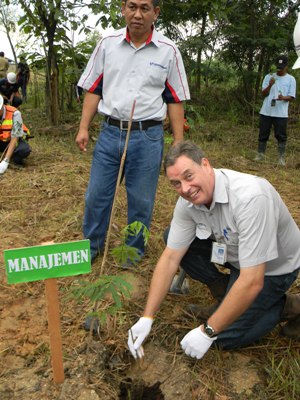 This activity was meant to support a local government campaign named ‘East Kalimantan  Green’ with the theme of ‘One Man, Five Trees,’ encouraging every single citizen to plant 5  tree  seeds.

The planting was conducted on February 2, at the Indominco’s hauling road at Kilometer 32,  involving hundreds of employees, soldiers of Bontang Military Command, and students.

Delivering opening ceremony, the Mine Head of Indominco Sean Pellow said that such an  activity could reduce the green-house effect and prevent global warming. Environmental  damage occurring everywhere today “should make people aware of the importance of environmental conservation,” he added. It is expected that the benefit of this activity could be  taken in  a couple years ahead.

The event was also attended by the Commander of Bontang Military Command Lieutenant  Colonel Infantry Djaka Budi Utama and the Assistant of Government Administration Syarifa.