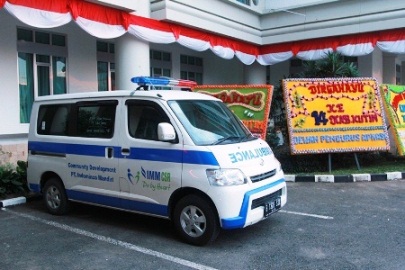 One unit of ambulance was bestowed on October 12 by Indominco to East  Kutai Regent Pak Isran Noor who then handed over it to the Sub-District Head  of Teluk Pandan Pak Syaifuddin acting on behalf of Indominco’ foster villagers  residing within his authority. The ambulance was delivered to the people’s  clinic in Teluk Pandan Sub-District afterwards.

Aiming at easing the government task in refining public health service, the aid  was given during a combined celebration of the-14 Anniversary of the  Government of East Kutai Regency and the 68th Anniversary of Indonesia’s  National Armed Forces (TNI). The joint celebration was taking place in the East  Kutai Government Office ground.

Such a mobile unit is critical for pregnant mothers who are about to give birth. It was expected that it could reduce the death rate of pregnant mothers as well as new born infants. But of course, it would be also beneficial for other villagers when facing an emergency and need immediate medical treatment such as traffic accident victims. Actually this donation was a response to the last three-year Community Consultative Committee meetings that had raised such an issue.

Witnessed by local lawmakers, government and military officials, the ceremonial giving of the ambulance was carried out by Indominco Government Relation Manager Maming representing the company. The aid was received directly by the East Kutai Regent Isran Noor.

Indominco then contributed IDR 1.2 billion to support the government policy on people’s housing program. That is equal to around 50 houses. Financed from regional budget plan and private enterprise sources, the government of East Kutai has planned to construct 1,169 units of house for the have-nots in a synergy with the TNI that runs some kind of responsibility program named “Indonesian National Armed Forces United to Develop Villages.”