The Board of Commissioners (BOC) shoulders the responsibility of overseeing and advising the Directors on matters of corporate management and strategy including the implementation of GCG principles. The primary duties and responsibilities of BOC are set forth in the Articles of Association, and are further detailed into 21 items in the Company’s GCG Policy that include, among others, the determination of the debt to equity ratio. The BOC in carrying out its duties is assisted by the Audit & Risk Oversight Committee and the Sustainable Development, Good Corporate Governance, Nomination and Compensation Committee, both of which are established and report directly to the BOC.

The BOC consists of seven members, of which two are Independent Commissioners.  The term of office for the current member will be up to the closing of the Annual General Meeting of Shareholders in 2022.

Affiliation Relationship between members of the Board of Commissioners, Board of Directors and controlling shareholders are as follows: 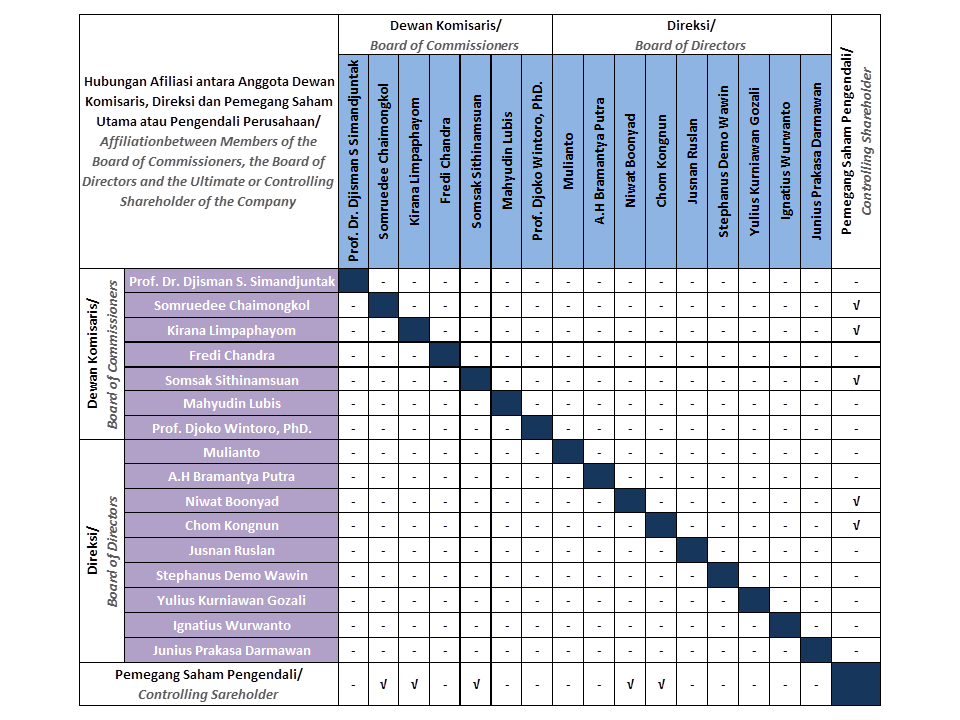 Prof. DR. Djisman S. Simandjuntak appointed as the Company Independent Commissioner on 27 July 2007. He started his career as an auditor in SGV-Utomo in 1973. In 1984 he was the Head of Economics Affairs Department for Center for Strategic International Studies (CSIS) and in 1999 was appointed as Chairman of the Board of Trustees for Centre for Strategic International Studies in Jakarta. Currently, he also served as the Rector of University of Prasetiya Mulya in Jakarta. He obtained his Bachelor of Economics degree from Universitas Katholik Parahyangan, Bandung in 1973 and his Diploma degree in Monetary Economic and Public Finance from University of Cologne in 1979 and also PhD of Economics degree in the same university in 1983.

Position at other companies and institutions :

Somruedee Chaimongkol was appointed as the Company's Commissioner on 27 July 2007. Joined Banpu in 1983, She also held an important position as Chief Financial Officer since 1999. She started her career in Banpu and has had more than 25 years experience in the mining industry. She is currently a Director of several Banpu companies, and Chairman of Banpu Provident Fund, also a member of the Banpu Risk Management Committee and member of the Commodity Risk Management Committee. She obtained her Bachelor degree in Accounting from the University of Bangkok, Thailand in 1983 and graduated from Harvard Business School, Boston, USA, for the Global Leadership program in 2000.

Position of other companies :

Mr Kirana Limpaphayom was born on 25 November 1974, before He was appointed as a commissioner on May 28, 2020, he served as president director since 28 March 2016. He joined the Company in 2015 as Senior Vice President, Office of the President Director. Prior to that, he served as Head of Strategic Planning & Analysis for Banpu plc in Thailand, then later as Executive Director of Banpu Australia and Director (Alternate) for Centennial Coal Co., Ltd. in Sydney, Australia. Prior to joining Banpu Group in 2009, he served various positions in several institutions, including bank, consultant, and pension fund, covering wide range of area such as legal & tax, organization & business development, and strategy management. He received his doctoral degree (PhD) in Sociology from University of Warwick, UK, in 2002, and his MBA (Executive) with concentration in finance, from Sasin Graduate Institute of Business Administration, Thailand, in 2008. He is also a Graduate of the Australian Institute of Company Directors (GAICD).

Position at other companies : President Director and President Commissioner at subsidiaries

Position at other companies :

Born on 20 January 1952, Mr. Mahyudin Lubis appointed by the Annual General Meeting of Shareholders convened on 29 March 2017 as the Company’s Commissioner. He has had more than 25 years of experience in mining industry, He began his career in the mining sector since 1989 in the Ministry of Mines and Energy, Republic of Indonesia, upon his pension from the Ministry of Mines in 2006, he joined the Company as an Advisor, later he was appointed as Director of PT Indo Tambangraya Megah Tbk and Director of PT Kitadin in 2007 up to 2012. In 2012 he was re-appointed as Advisor until 2015 and since 2016, he was appointed as President Commissioner and Commissioner of the Company’s Subsidiaries and Commissioner of PT Indo Tambangraya Megah Tbk in 2017. He graduated from the faculty of Mining Engineering of Institute Technology Bandung in 1977.

Position at other companies : N/A

Born on 28 April 1953, Prof. Djoko Wintoro, PhD  appointed as the Company’s Independent Commissioner by the Annual General Meeting of Shareholders convened on 23 March 2018. Currently, he also served as the Vice Rector for Operations, Finance, Accounting & Human Resources Management of  Prasetiya Mulya University. He obtained Master of Commerce from Wollongong University Australia in 1991 and also PhD of Behavioral Finance in the same university in 2000.